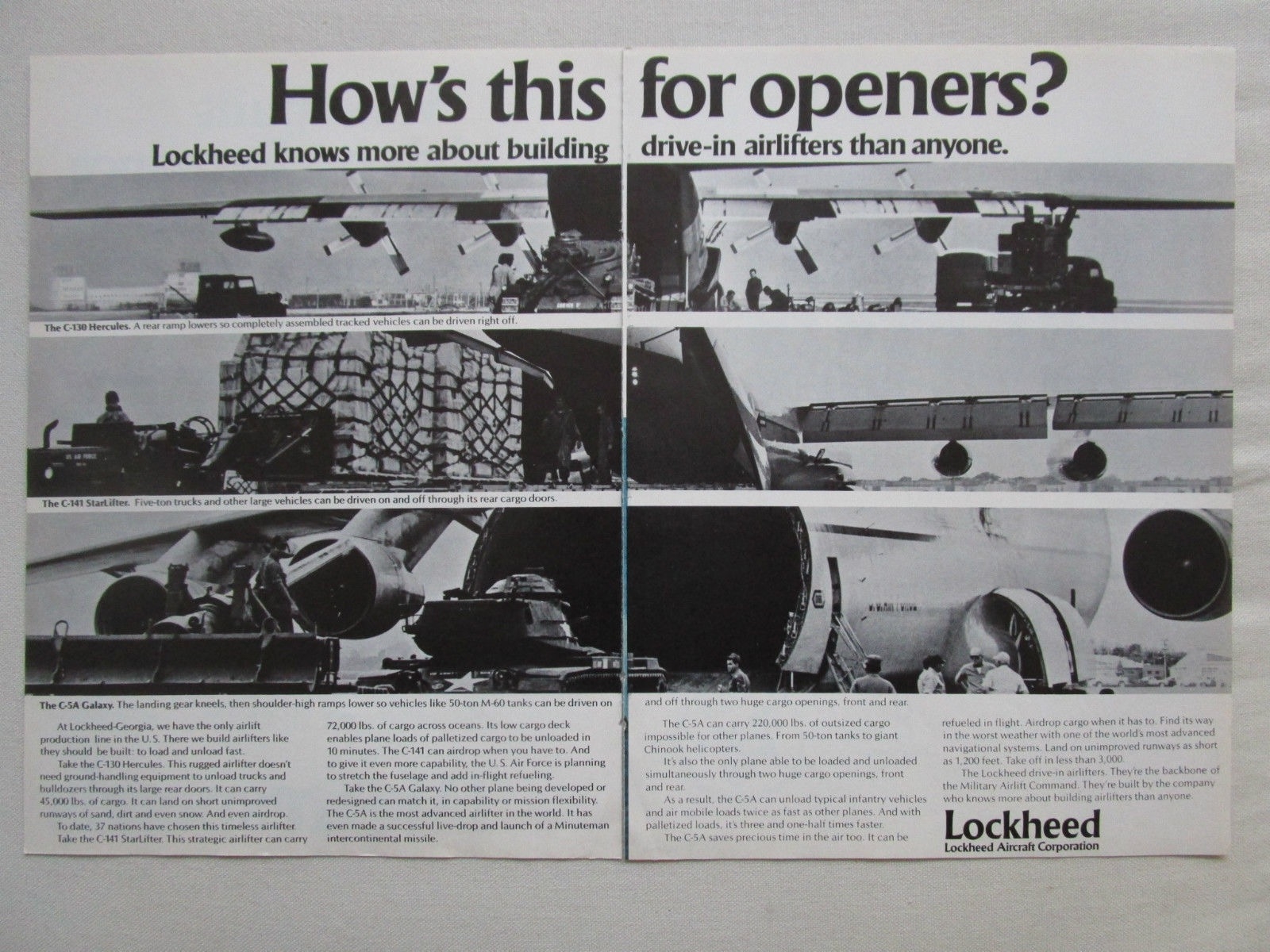 How’s this for openers?

Lockheed knows more about building drive-in airlifters than anyone.

The C-130 Hercules. A rear ramp lowers so completely assembled tracked vehicles can be driven right off.

The C-141 StarLifter. Five-ton trucks and other large vehicles can be driven on and off through its rear cargo doors.

The C-5A Galaxy. The landing gear kneels, then shoulder-high ramps lower do vehicles like 50-ton M-60 tanks can be driven on.

At Lockheed-Georgia we have the only airlift production line in the U. S. There we build our airlifters like they should be built: to load and unload fast.

Take the C-130 Hercules. This rugged airlifters It doesn’t need ground-handling equipment to unload trucks and bulldozers through the large rear doors. It can carry 45,000 lbs. of cargo. It can land on short unimproved runways of sand, dirt and even snow. And even airdrop.

To date, 37 nations have chosen this timeless airlifter.

Take the C-141 StarLifter. This strategic airlifter can carry 72,000 lbs. across oceans. Its low cargo deck enables plane loads of palletized cargo to be unloaded in 10 minutes. The C-141 can airdrop when you have to. And to give it even more capability, the U. S. Air Force is planning to stretch the fuselage and add in-flight refueling.

Take the C-5A Galaxy. No other plane being developed or redesigned can match it, in capability or mission flexibility.

The C-5A is the most advanced airlifter in the world. And will be for years to come. It has even made a successful live-drop and launch of a Minuteman intercontinental missile.

The C-5A can carry 220,000 lbs. of outsized cargo impossible for other planes. From 50-ton tanks to giant Chinook helicopters.

It’s also the only plane able to be loaded and unloaded simultaneously through two huge cargo opening, front and rear.

As a result, the C-5A can unload typical infantry vehicles and air-mobile loads twice as fast as other planes. And with palletized loads, its three and one-half times faster.

The C-5A saves precious time in the air too. It can be refueled in flight. Airdrop cargo when it has to. Find its way in the worst weather with one of the world’s most advanced navigational systems. Land on unimproved runways as short as 1,200 feet. Take off in less than 3,000.

The Lockheed drive-in airlifters. They’re the backbone of the Military Airlift Command. They’re built by the company who knows more about building airlifters than anyone.