The C-130 Hercules is the perfect airlifter 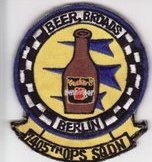